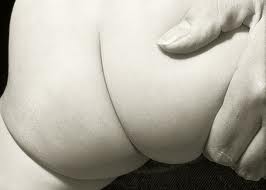 In the last 2 months, I have assisted 3 moms with breech babies. I don't know if it is the weather, the season, the heavens... I have no idea.

I can tell you, though, that there are four breech presentations: footling, kneeling, frank, and complete.

There are also many reasons why a baby might be breech: emotional reasons, short cords, bicornate uteri or other anatomical shape of the womb, maternal ligament or muscular torsion, maternal skeletal subluxations, placental placement, maternal abdominal muscle tone, amniotic fluid levels, or maternal family history all can play a role.  (for more information see here).

I can also tell you that it has given me a lot of time to consider options for women who have breech babies and all the ways we can try to help women know their options.

From about the mid-70's until recently, it used to be no questions asked, breech birth meant cesarean. In the past few months, though, numerous doctors have been questioning this knee-jerk reaction and Canada has published new guidelines for breech birth, as well as has been promoting and producing numerous breech workshops throughout Canada to raise awareness and training for vaginal breech birth.

For the vast majority of U.S. women planning a hospital birth, when they hear the news that they are carrying a breech baby, their doctor or hospital-based midwife will schedule a breech cesarean between 37-39 weeks. There are other options though.

Concisely, here are your choices:
Elective Cesarean
My readers have heard me harp on them enough to know that I am never a supporter of elective cesarean ( = without medical justification), so I will let someone else do the harping for a change.


"The Coalition for Improving Maternity Services (CIMS) is concerned about the dramatic increase and ongoing overuse of cesarean section. Since 1983, one in five women or more has given birth by this major abdominal surgery. Today, one in four or 25% of women have a cesarean for the birth of their baby. The rate for first-time mothers may approach one in three. Studies show that the cesarean rate could safely be halved.

The World Health Organization recommends no more than a 15% cesarean rate. With a million women having cesarean sections every year, this means that 400,000 to 500,000 of them were unnecessary. No evidence supports the idea that cesareans are as safe as vaginal birth for mother or baby. In fact, the increase in cesarean births risks the health and well being of childbearing women and their babies." - For more information read here.

The exercises herein outline the least to most aggressive means for encouraging baby to change his/her position to head-down. Easy examples of these types of exercises can range from daily habits (i.e. if mom has low amniotic fluid, drink more, if mom has postural issues, adjust accordingly) to specific methods and practices (chiropractic, manual movement, acupuncture).

Emotional State - The first thing that I touch on when a woman tells me she is carrying a breech baby is her emotional and mental state. The least aggressive means of encouraging baby to turn are emotional/and mental relaxation. Many midwives swear that a large number of babies that are carried breech are in that position for emotional or mental disquiet.

These can include:
When a woman is not sure if this might be the reason for her baby's position, I encourage her to spend some time mother-centered journaling. This means that mom would set apart a time where she will not be interrupted to write. She should have water on hand, have recently emptied her bladder, have a few sheets of fresh paper, and a pen. During her journaling, she can ask herself to be honest about her feelings toward her mother, being a mother, and not being pregnant anymore. Then, during her writing time, she will write without pause - freely allowing her words to come from her mind and heart to her pen, no grammatical corrections and no crossing out.

After completing the exercise, she can talk with her midwife, doula, close friend, sister, or partner/spouse to find out how to resolve anything that might have come up during her writing time. Additionally, she can pray, meditate, visualize, and ask baby to turn.

I have watched women get into a warm tub of water in a dark bathroom with nothing but candlelight and, while touching/rubbing their bellies, listening to their bodies, and talking to baby, seen their babies turn vertex.

Beyond emotional and physical relaxation, the most common ways to change babies presentation from breech to vertex is to try positional exercises.

Inversions - the key to inversions are to do them as long as comfortable. These can include table inversions, knee-chest positions, water inversions, or dumping.

Table inversions are just what they sound like, inversions on a table-like surface. Some midwives will combine inversion tables with other methods of working to turn baby's position. This can be done at home on a piece of plywood or ironing board, or on an actual inversion table.


Example of knee-chest position (and moxibustion)

Rebozos - Rebozos give almost any position an added 'umph' by encouraging baby through demonstration of how to wiggle or jiggle into a head-down position. There are two rebozo breech moves in particular. One is a knee-chest combined with ribozo to put pressure on baby's head and encourage them to move. (see picture to the right). 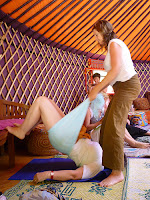 The second is a breech sifting. Follow the position in the picture to the left. Then, with the 'rebozo' in place, have a partner/friend 'sift' your baby. The basic movement is more like a rhythmic step than a swing.  You are not swinging the mothers hips from side to side.  Instead you are slightly pulling one end of the rebozo, then the other, back and forth rather quickly.  This basic movement should be relaxing to mom. This causes a jerk to the baby which encourages movement to the desired position.

Now, if you make it here without any of the above working, continue to try the positional exercises in conjunction with the methods below as they will increase the odds of one of them working (i.e., try dumping right before the Webster).

Yoga - yoga is body work and, since we are trying to encourage baby's body to move, it makes sense that yoga works well for this purpose. A guest blogger wrote a wonderful article on yoga and how it can help when baby is breech here. Specifically, I love the last picture in that post.

Acupuncture/Moxibustion - You can see an example of moxibustion in the video referenced earlier in this post. This acupuncture technique involves burning moxa sticks over a certain acupressure point on your little toe every day for 10 days. Alternately, this can be done with a fingernail head of a ballpoint pen on that same point on the little toe (BL67). Some report success rates as high as 80%, while others report success as low as 50%.

Chiropractic Care - There is a chiropractic treatment called the Webster Technique which encourages the mother’s pelvis to become straight and aligned. This would decrease the chance that mom's skeletal alignment 'holds' baby in a breech position. It is very gentle and noninvasive. The success rate for this technique is shown to be anywhere from 75-95%. Additionally, there are other techniques with great success including Bagnell's Technique, Malott's Technique, and others.

Homeopathics - There are some homeopathics, including Pulsatilla and Arnica, that have been shown to encourage a baby to turn head down. These are best used in conjunction with other methods of turning baby vertex. As I am not a licensed homeopath, I encourage you to contact a local herbalist, homeopath, or midwife in your area for more information on their uses, dosages, risks, and contraindications.

Essential Oils - putting some peppermint oil (diluted in coconut or other carrier oil) over babies head has been known to encourage  baby to turn. So have ice packs used the same way.

Some doctors 'require' that mom have an epidural in place or other relaxation medication (such as morphine or stadol/nubaine/demerol), and most will 'require' that, immediately after the ECV, mom will either be induced (if baby goes head down) or be given a cesarean (if it is not successful). I say 'require' because you can always refuse. An example can be seen here:


Vaginal Breech Birth
There are certain criteria when considering a vaginal breech birth. The very biggest being making sure that your birth team has experience with vaginal breech birth. Additionally, reducing risk for breech vaginal birth includes candidates who meet the following:
Other protocols and guidelines can be read about on Spinning Babies, Birth Light,and the SOGC.

Let Baby Decide
Some women, for whatever their reasons might be, choose not to change providers to one familiar with breech birth. For these women, a good option might be to wait and let baby decide. This simply means that, rather than scheduling an automatic cesarean at 37-39 weeks for breechness, waiting until labor begins on it's own.

At that point, mom can work through early labor, and then, during active labor, reassess baby's position. If baby is still breech, the care provider would go ahead with the cesarean and, if baby has moved into a vertex position, mom can go ahead with labor and birth vaginally.

In Conclusion:
If you happen to be one of the women who get the news that their baby is sitting breech in the womb, know that you do have more options than a scheduled cesarean. Also know that there are women in your area who will love and support you through every option that you have.

If you are specifically in the Houston area and need information on breech-friendly doctors and midwives, just give me a call. I also have a list of midwives and doctors who will do ECV as out-patient (without requiring immediate cesarean or induction afterward), chiropractors familiar with Webster and other breech-turning chiropractic techniques, acupuncturists, and more.

And finally, for encouragement:

Further Reading:
Head's Up
Breech Birth Statistics
Spinning Babies
A Breech in the System
Stand and Deliver: Dance of the Breech
Posted by Nicole D

This is a great overview of breech babies! You forgot one idea... hypnosis.
www.enjoybirth.com/faq-breech.html

Studies have shown it is very effective in helping babies turn. :)

I DID forget that. I MEANT it when I wrote about relaxation, meditation, visualization... I just forgot to write hypnosis :)

Implied doesn't work on posts though, so thank you so much for the link! :)

Hi my baby was in cephalic position up to 37wks but when i went to hospital to get my Afi, baby is in breech position can i know the reason. ...... And chances of baby coming back to cephalic....rest everything is normal.

Ѕupегb blog yοu haѵе
heгe but I was curіοus about if уou knew of any forums that сovеr thе
same toρics discusseԁ in thiѕ
articlе? I'd really love to be a part of online community where I can get feedback from other knowledgeable individuals that share the same interest. If you have any recommendations, please let me know. Kudos!
Here is my web site ... innovative research clenbuterol 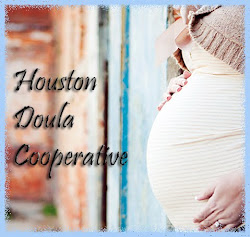 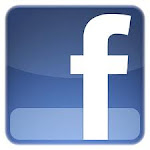